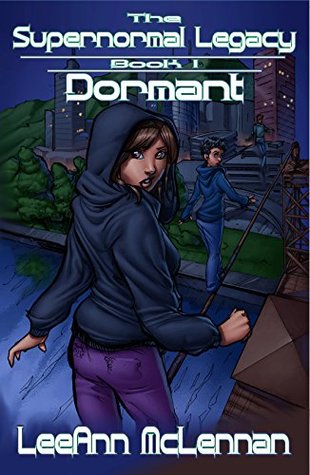 The Supernormal Legacy: Book 1 Dormant by LeeAnn McLennan (Not a Pipe Publishing, February 2018)

I was predisposed to like this story of a reluctant teen superhero in the Pacific Northwest; it’s my sub-sub-genre, too. McLennan delivers the goods with a relatable young protagonist in a recognizable real-life setting. Dormant provides a nice twist on the origin story, too: rather than being surprised by the sudden advent of powers, Olivia has known about them her whole life and doesn’t want them.

Who wouldn’t want superpowers? But 14-year-old Olivia has good reason. Descended from a long line of “supernormals,” as a child she witnessed her mother’s death in action and blames herself. She rejected her powers and that side of her family, suppressing abilities that should have manifested when she was 13. When a bank robbery compels her to use her abilities, Olivia is drawn back to the “family business” and begins training with her cousins to learn to control her powers and help protect the city of Portland from supernormal bad guys and monsters. (I really loved that her superteam is a group of cousins, a special kind of friend-relative that everyone should have a bunch of to grow up with.) When more than one local landmark is violently destroyed in her presence, Olivia and her family begin to wonder if she’s turning into a villain herself, unconsciously using powers when upset or angry. Meanwhile, she’s trying to keep up her old normal life of school, friends, and boyfriend while avoiding a mean girl who has it in for her; but the universe—and her aunt and uncles—have other ideas. Plenty of action–and humor–keep this from devolving into an angsty-teen emo-fest.

For someone who spends most of the book rejecting or suppressing her powers, Olivia takes great delight in using them. She knows deep down that this is who she is and what she does. I especially liked those scenes, which showed she was still capable of joy. Although she had good reason for turning away from that identity, embracing it seems like her one hope for healing from her early trauma. By the end of Book 1, she has endured more than one tragedy, but has excellent motivation for training and using her abilities. Book 2, Root, comes out in June. Read Book 1 now so you’re ready.