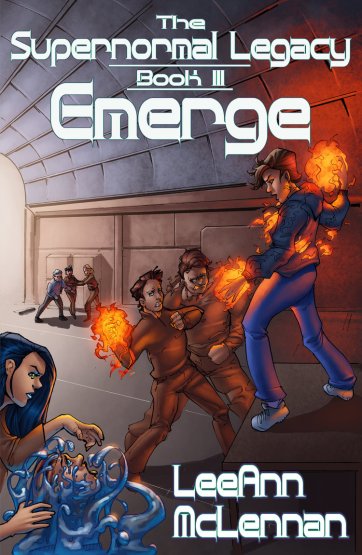 The Supernormal Legacy, Book 3: Emerge by LeeAnn McClennan (Not A Pipe Publishing, 2019)

Emerge, the third book of this trilogy, turns up the heat on main character Olivia Woodson Brighthall. In book 1 Dormant, she belatedly manifested the supernormal abilities she had rejected as a child after the death of her mother and began training with her cousins to hunt monsters and fight bad guys. In book 2 Root she grew in skill and confidence and embarked on a road trip with her cousins (and normal friend Anna) to rescue her friend Ben from the terrorist organization Mountain of Ash that killed her mother and brainwashed her cousin Emma into joining them. Book 3 finds Olivia in the Ashers’ clutches, far from home, her powers suppressed, and only alive because the head terrorist wants her blood to make an enhancement serum.

The suspense never lets up in this volume. Olivia endures torture in the form of altered memories as the villain seeks to power up her blood. Escape attempts are foiled as Olivia and her friends gradually learn what Mountain of Ash has in mind for the inferior normals of the world, and for the supernormals who seek to protect them. It’s a nice touch that Olivia agrees with Mountain of Ash on one point: supernormals should be able to use their powers openly. She does not agree with their cruel, destructive methods and is hurt when friends seem to go over to the dark side. Although the final battle is a pulse-pounding shocker with terrible losses, the book pulls off a poignant but hopeful ending.

If you don’t find it on the shelves of your favorite independent bookstore, ask them to order it for you, or purchase online here:

Get it at Barnes & Noble HERE. They support indie authors and have hosted Not a Pipe Publishing’s signings at multiple locations.

Get it on Amazon HERE.

Get it at Powell’s HERE.

One thought on “The Supernormal Legacy, Book 3: Emerge”