Naming a band is an act of concentrated creative expression. Square Pig in a Round Hole exists to reward five favorite band names each week. Winners are (usually) listed alphabetically.

Selection is wholly unscientific and subject to whim, with a bias toward wordplay, humor, and local flavor. In most cases, I won’t know anything about the bands at the time of selection. Thanks to the Seattle Times nightlife listings for abundant source material!

SQUARE PIG IN A ROUND HOLE PANDEMIC EDITION #2

How’s everybody holding up? I am lucky that I can do most of my day job from home, as can the other employed people in the household, though it has been an adjustment. Sanity walks and comfort food seem to help. It’s inspiring to see how artists and arts organizations have found ways to keep sharing music. Check out The Quarantine Sessions if you haven’t already.

With every bar still a dead bar and every show cancelled, I’m once again digging into the vault to bring you a pandemic-themed retrospective. The names are still great even if the bands aren’t playing. If you are able, please buy their music and merch. And come back next week for more band names.

(December 13, 2014) Whether or not they are bastards, these guys are sick in the best sense of the word. (Bonus: back in 2014, I was unable to dig up any online presence. Now I can finally let them know!)

(April 23, 2016) Why, exactly, do we want what sounds like a creepy phantom running our markets? How is that a good idea? Great name for a band, though. 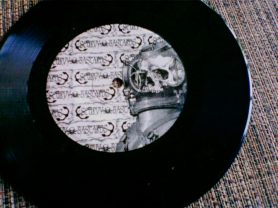 (August 1, 2015) Walking along Lake City Way yesterday, I found a discarded 7″ lying by the side of road. I was almost home and it was so hot out, I almost didn’t pick it up. But how often do you find an unbroken (not undamaged) vinyl record just lying there?  I picked it up. It still plays well enough for us to determine that both bands — Iron Lung and Scurvy Bastards — have names perfectly suited to their genres. For that, both receive honorable mention in this week’s blog.

(December 27, 2014) A simple and obvious play on the It Gets Better campaign, but so punk and so often true.

(June 25, 2016) Another favorite category shines a spotlight on an isolated body part. Here we have a variation on that theme, pairing up two very different but necessary parts that happen to alliterate.

One last thing before you go: I share highlights from this blog in my quarterly author newsletter, The Storypunk Report, as well as news of what I’m writing and reading, upcoming events, and other goodies, including “Wizard in the Mosh Pit,” an exclusive short story just for subscribers. Click the link to check out the first five issues and subscribe here for future issues. Issue #6 coming in April! (Or just follow the blog for your weekly dose of band names.)

Naming a band is an act of concentrated creative expression. Square Pig in a Round Hole exists to reward five favorite band names each week. Winners are listed alphabetically. Selection is wholly unscientific and subject to whim, with a bias toward wordplay, humor, and local flavor. In most cases, I won’t know anything about the bands at the time of selection. Thanks to the Seattle Times club listings for abundant source material!

The stars aligned such that I actually left the house and went to a show last night! It helped that it was at the Shanty, a short walk from my house. Always a pleasure to hear The Tom Price Desert Classic, and also worthwhile to be introduced to Whiting Tennis. As usual, there’s no end of shows this week. These names rose to the top:

I like the implication that not only do we accrue some kind of points or demerits for our behavior in life, but that we can choose when to redeem them.

A very specific and very weird historical reference — dancing and plague are not usually found in the same phrase. As a band name it’s long enough to approach awkwardness, which is one of my favorite categories.

Another favorite category shines a spotlight on an isolated body part. Here we have a variation on that theme, pairing up two very different but necessary parts that happen to alliterate.

Even with the grunge-flannel shirt association, “plaid” and “rock bands” doesn’t seem like the most obvious pairing, so it stood out that there was not one but two this week. The Plaid Perspective not only alliterates but seems to imply a complex but colorfully unsubtle take on things. Meanwhile, Stark Raving Plaid is having fun with puns and genre: “Celtic Rock Soul Funk Folk.” 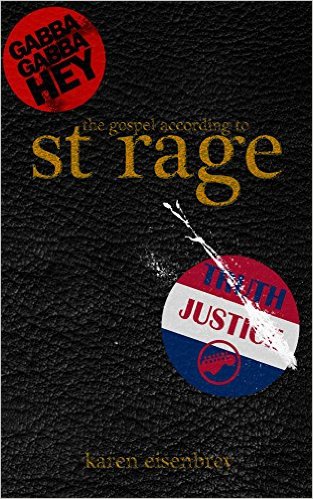 My debut novel, The Gospel According to St. Rage, will be released in paperback and ebook by Pankhearst on July 14, 2016. Preorder the ebook now: http://getbook.at/gospel

Barbara isn’t your typical high school junior. She’s been invisible since the third grade. But when a magic hat brings her back into the light, Barbara is ready to take on the world. First priority? Start an all-girl garage band. Miraculous super powers were never in her plan, but sometimes you get what you need. Bullies and school shooters don’t stand a chance.

Yes, we all love Wonder Woman, Black Widow, and Jessica Jones, but Barbara is the hero her high school deserves.