Naming a band is an act of concentrated creative expression. Square Pig in a Round Hole exists to reward five favorite band names each week. Winners are (usually) listed alphabetically. Selection is wholly unscientific and subject to whim, with a bias toward wordplay, humor, and local flavor. In most cases, I won’t know anything about the bands at the time of selection. Thanks to the Seattle Times club listings for abundant source material!

As we near the end of what has been in many ways an awful year, we take our good where we can find it. Having eaten the big dead bird and avoided the malls by taking a long walk in the woods, I plan to round out the holiday weekend by donating blood today.  There is still much to be thankful for, including the wildly creative Seattle music scene and the fans and venues that make it possible. Band names are big part of that; here are five that caught my eye:

This is exactly what Thanksgiving has become. Hooray for the pumpkin pie.

I don’t often play favorites with my weekly picks, but I’m making an exception and declaring this my favorite in a long time. The kindest editors have strong opinions on punctuation but allow the writer some comma flexibility.

This is either the reward for sailors who survive the shipwreck, or what earplugs make possible in the big city. 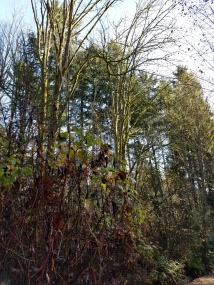 That long walk in the woods on Black Friday took place in Ravenna Park, one of Seattle’s beautiful forest parks that follows a creek  along a, yes, steep ravine in the midst of the city.

Another name for our most recent Presidential election.