‘A gripping fantasy adventure with a strong, memorable protagonist. A FINALIST and highly recommended.’ The Wishing Shelf Book Awards

Order your copy from your favorite independent bookstore by asking for it at the front counter, or order it from one of these fine online booksellers:

At the online launch party on May 26, I promised to put up a guide for pronouncing my characters’ names. You can find it here.

“An impressive fantasy. If the love child of JK Rowling and Tom Clancy were raised by Leslie Marmin Silko, she would grow up to be something like this book.”

“Touching, tender, and blazing with brilliance, Daughter of Magic is a coming-of-age story that fans of Carol Berg’s The Bridge of D’Arnath series will adore.”

“‘Tonight we’ll fly and be heroes.’ Daughter of Magic is a wonderful tale of power, secret and exposed, set against a rich landscape in a world where the past rises up to overwhelm the present.”

“Daughter of Magic is a heart-wrenching tale of loss and betrayal, filled with compelling characters who must cooperate and embrace the terrifying truth of who they are or face the destruction of the world and peoples they cherish.

“In a world where magic is rare and regulated, there are high expectations for Luskell, the daughter of two powerful wizards. Turning her back on her heritage and the city full of intrigue, Luskell finds temporary tranquility in the gentle land of her childhood. Her peace is shattered when she discovers the plot to kill her parents and destroy the hard-won harmony between the different peoples. Racing against time and the looming specter of death, Luskell must embrace her talents and work with the budding magicians of other lands to save her parents and their world or risk the annihilation of everything she holds dear.”

-Mikko Azul, author of The Staff of Fire and Bone

Luskell has been dreaming about dead people.

Her parents may be the two most powerful wizards in the country, but Luskell doesn’t have any magic of her own, so she’s stuck spending a summer with her grandmother in the small town of Deep River where her father is the hometown hero. Then the dead start to visit her dreams with mysterious messages. In a secret pact with her friends Jagryn and Laki, Luskell begins to teach herself magic and discovers an apparently bottomless well of untapped power. But before she has control over this ability, her dead grandfather appears with a dire warning. With no way to send word to her parents, Luskell and her friends mount a daring rescue. Can they get to the capital in time to save the country … and her parents’ lives? 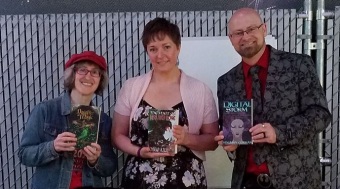 Me with Mikko Azul and Benjamin Gorman at the pre-release launch event on May 19, 2018 at MoPOP

Daughter of Magic is one of eight books by women authors to be published by Not a Pipe Publishing in 2018, The Year of Publishing Women. Read the launch announcement here.